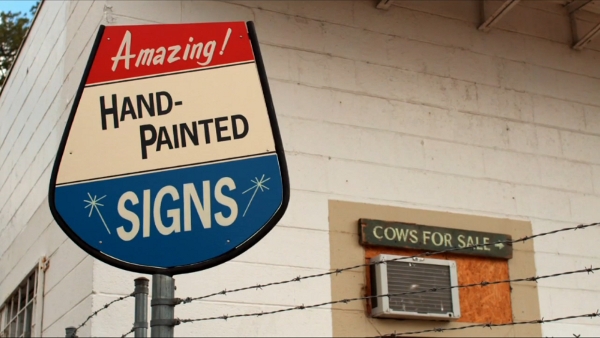 „There was a time, as recently as the 1980s, when storefronts, murals, banners, barn signs, billboards, and even street signs were all hand-lettered with brush and paint. But, like many skilled trades, the sign industry has been overrun by the techno-fueled promise of quicker and cheaper. The resulting proliferation of computer-designed, die-cut vinyl lettering and inkjet printers has ushered a creeping sameness into our landscape. Fortunately, there is a growing trend to seek out traditional sign painters and a renaissance in the trade.

In 2010 Directors Faythe Levine and Sam Macon, with Cinematographer Travis Auclair, began documenting these dedicated practitioners, their time-honored methods, and their appreciation for quality and craftsmanship. Sign Painters, the first anecdotal history of the craft, features the stories of more than two dozen sign painters working in cities throughout the United States. The documentary and book profiles sign painters young and old, from the new vanguard working solo to collaborative shops such as San Francisco’s New Bohemia Signs and New York’s Colossal Media’s Sky High Murals.“